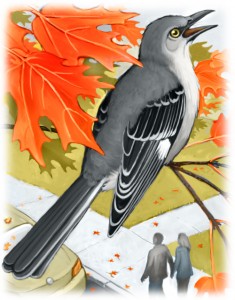 “You never really understand a person until you consider things from his point of view–until you climb inside of his skin and walk around in it.”

Harper Lee, the legendary author behind To Kill a Mockingbird, turns 88 years old today. Lee only wrote the one novel, which has gone on to become one of the most important and influential works in American literature.To Kill a Mockingbird won the Pulitzer Prize in 1961.

Her quote has remarkable relevance in today’s creative, advertising and marketing world.

Creative Insight
Write an ad that resonates with your consumer; don’t just do an ad-hoc one to satisfy your client. You need to walk in your consumer’s shoes. You need to consider things from their point of view. And, only when you’ve climbed inside their skin and walked around it, will you have an idea that’s brilliantly on point.

Thank you Harper Lee for giving us one of the most powerful novels ever. And, happy 88th to you!

What couldn’t Ernest Hemingway eat? What car did he drive? 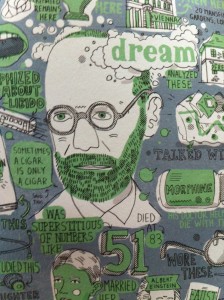 Did you know that Sigmund Freud was superstitious of numbers like 51?

Artists, Writers, Thinkers, Dreamers will delight the young and old, as you uncover weird and fascinating stuff, which made them human. The author believed that by reducing these 50 famous folks to basic equations of ordinary life, it’s fascinating to see how much their everyday choices make them more human.

When you apply that thinking to marketing and advertising, it makes perfect sense. When your consumer is someone you have taken the time to know and understand, then you can deliver a product or service that works to their needs, rather than just shoving one down their throat. In this manner, you grow a brand following that is loyal and respects your business acumen.

It’s nice to look at some of the everyday obsessions of the world’s most notable thinkers. It feels like we can relate to them. Obviously not everyone played the banjo as a child like John Lennon, but it’s lovely to uncover another relatable fact about him such as he drank lots of tea and was blind without his glasses. Perhaps now aspiring musicians (and everyone who wears glasses) can believe that they too can become the next great Lennon. 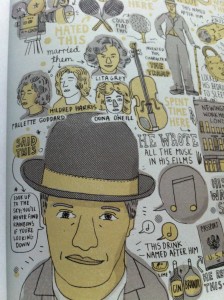 “Look up to the sky; You’ll never find rainbows if you’re looking down.” ~ Charlie Chaplin 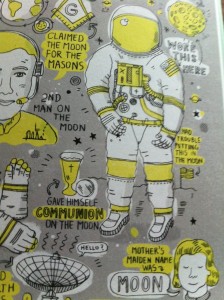 Did you know Buzz Aldrin’s mother’s maiden name was Moon?

And for you Harry Potter fans out there, do you know who else had read these books. None, other than Barak Obama. 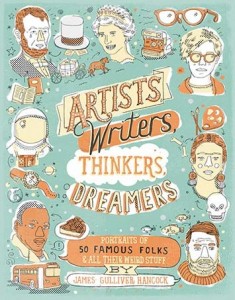 Artists, Writers, Thinkers, Dreamers by James Gulliver Hancock, is published by Chronicle Books and distributed in Canada by Raincoast Books.

How do you overcome the unseen forces that stand in the way of inspiration? Ed Catmull, President of Pixar Animation and Disney Animation has a few ideas. In fact, with the help of Amy Wallace he’s written a book about it called Creativity, Inc. 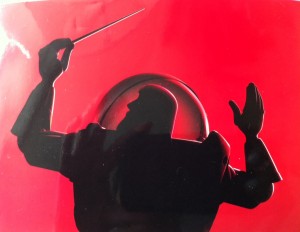 Ed Catmull has searched his whole life for better ways of seeing. For him, the key to solving problems is finding ways to see what’s working and what isn’t. He admits that it sounds a lot simpler than it is.

His two childhood idols are Walt Disney and Albert Einstein. Even at a young age, they represented the two poles of creativity.

“Disney was all about inventing the new. He brought things into being – both artistically and technologically – that did not exist before. Einstein, by contrast, was a master of explaining that which already was.”

Ed Catmull loved how the concepts Einstein developed forced people to change their approach to physics and matter, to view the universe from a different perspective.

The book is remarkably well written. Ed Catmull postulates gems from his experience, deducing the idea that creativity isn’t just about ideas; creativity is about the people. Even though there are some themes that may resonate from other management books, Creativity, Inc. takes on a “learn from what I did” rather than “do as I say” attitude. And, because it incorporates lessons from some of the smartest people in the world, it’s a book we can look up to.

“What was causing smart people to make decisions that sent their companies off the rails?”

While Creativity, Inc. provides a unique peek into the backdoor of a company that revolutionized the animation industry, it is undoubtedly sincere in it’s approach. Without embellishing its achievements or failures, the book is a rare journey into the real story of Pixar Animation. It is the undistorted story of the success of a giant.

But, there is also an acknowledgement that behind all the magic of Pixar lies the blood, sweat and tears of the people who made it happen.

Ed Catmull tells us about the true story of innovation and even a personal account of what it was like to work with Steve Jobs.

“Steve was hard-changing — relentless, even — but a conversation with him took you places you didn’t expect. It forced you not just to defend but also to engage.”

Creativity, Inc. is really a book about the overcoming the true forces that stand in the way of creative innovation. Building a company is hard, but building one that has a great creative culture is even harder. In his years of helping build Pixar Animation, Ed Catmull feels he’s discovered the underlying building blocks. The starting points at the end of the book are a lovely synopsis of principles of managing success. But as he clearly defines, they serve merely as a prompt towards deeper inquiry, and are not a conclusion.

“The process either makes you or unmakes you.” ~ Brad Bird.

It’s nice to know that the individual plays the active role, not the process itself.

HERE ARE A FEW THINGS WE GLEANED FROM CREATIVITY, INC.
When faced with a challenge get smarter
Attract the sharpest minds; put your insecurities away.
Always take a chance on the better, even if it seems threatening.

Contrary to popular belief, too many cooks do not spoil the broth.
Any hard problem should have many good minds simultaneously trying to solve it.

“Every creative person, no matter their field, can draft into service those around them who exhibit the right mixture of intelligence, insight, and grace.”

What you need is to make your own solution group. How do you do it?
Choose people who
1) make you think smarter and
2) put lots of solutions on the table in a short amount of time.

Creativity, Inc. is Ed Catmull’s best attempt to put down on paper some of his ideas about how the culture at Pixar was built. And, he definitely succeeded.

“For all the care you put into artistry, visual polish frequently doesn’t matter if you are getting the story right.”

A few days ago, the media reported a study on procrastinators. Apparently procrastination is hereditary and can be blamed on your genes. I really didn’t go into depths into this research, but it made me think. Well, what’s the point?

I am a procrastinator, especially when it comes to things like taxes. But, there’s no way I can attribute my procrastination to my genes. Everyone in my family possesses the go-getter gene. If there’s anything to be done, you can count on them to do it. If they don’t know how, they’ll figure out a way.

If anything, I’ve learnt that nothing is impossible. To every problem there is a solution. It may not be obvious, but it’s still there. So, what’s my solution to procrastination? 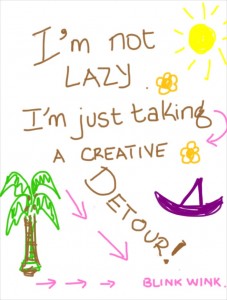 If you are going to waste time, why not waste it wisely. For example, if you plan (or don’t plan) to spend time listening for countless hours on the phone, have a blank notebook beside you and doodle away. It just may help you to think of a creative idea or just ensure that you don’t go into a fit of rage after the phone call feeling like you wasted your day.

In her book, Living Out Loud, Keri Smith offers various activities to fuel a creative life. She even suggests we “Doodle wildly” and try new colours and techniques.

The tried and true is boring. No wonder it’s a chore to get down to our taxes. But if we reward ourself with good creative time wasters, then perhaps we’ll just be motivated to tackle the things that need to get done.

———————————————-
Whatever you are, be a Good One by Lisa Congdon, is published by Chronicle Books and distributed in Canada by Raincoast Books.

Our motto this week is inspired from our last post: Whatever you are be a good one! 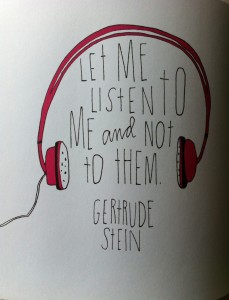 Picture from Whatever you are, be a Good One by Lisa Congdon. Published by Chronicle Books and distributed in Canada by Raincoast Books.

Listening is something we take for granted. Most people think they are good listeners. In fact, you would be hard pressed to find someone who will admit to not being a good listener. But in reality, a lot of people listen to only what they want to listen to.

Imagine yourself in a meeting. Even better, let’s say it’s a brainstorming meeting. You have something to contribute. So does everyone else. Your mind is churning through a million ideas. At the same time, someone else is speaking. As you formulate the big idea in your head, can you honestly say you are listening attentively to every single thing your colleague is articulating?  It’s impossible. What you may pick on are bits and pieces of the conversation that you may use to build your own idea.

So, when you are aware of this, you are able to tweak your behaviour. Listening is a two-way street. But along with verbal cues, there are also non-verbal ones. When in client meetings or pitches, listen. Really listen. Is the client liking your work and not saying anything? Is there one piece of creative they’re paying more attention to? Is there a reason?

When you listen (both to verbal and non-verbal conversations) you become better at what you do. And, clients appreciate that.

Just like Blink, we know that if you were a book, you’d like to be picked up again and again!

ThinkBlink Inspiration of the day

Quotes are inspiring. From time to time, I pull a book from my library to remind me what is really important in the world. It also motivates me. Whatever You Are, Be A Good One by Lisa Congdon is my latest inspired acquisition.

I love this book for several reasons. One, because it has a great title. Two, it’s visually interesting. If you read ThinkBlink regularly you’ll know we follow the mantra that Words and Design work artfully together. Finally, if you read our last blog post If I were a Book then this blog Whatever You Are, Be A Good One seems to be the natural next chapter.

Whatever you are, be a Good One by Lisa Congdon, is published by Chronicle Books and distributed in Canada by Raincoast Books.

If I were a book, which book would I be? Recently I came across a book that made me think about this question. Ironically this book was also called If I were a Book by José Jorge Letria (Illustrated by André Letria).

I took a few inspirations from this book that I would apply in life: 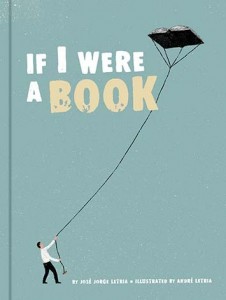 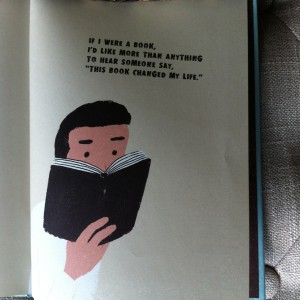 IF I WERE A BOOK,
I’D HELP SOMEONE SOAR.

IF I WERE A BOOK,
I’D LIKE MORE THAN ANYTHING
TO HEAR SOMEONE SAY,
“THIS BOOK HAS CHANGED MY LIFE.”

Here’s one that I’ve come up with that I’d like to make my motto:

IF I WERE A BOOK,
I’D LIKE TO BE PICKED UP AGAIN, AND AGAIN.

What book would you be if you were a book?

Tell us in the comments below.
Or, if you’re on Twitter use the hashtag #ThinkBlink and #IfIWereABook, and remember to @BlinkCanada

If I Were A Book by Jorge Letria (Illustrated by André Letria), is published by Chronicle Books and distributed in Canada by Raincoast Books.