There are things that get to me and this is one of them: Brands that apologize because they have to, but really are blaming the customer.

Exhibit 1:  What happens across the border can still touch you

Remember Abercrombie and Fitch? The brand that blamed their customer for being too fat and wanted to cater to a supposedly exclusive audience. Did CEO Mike Jeffries forget that the people really buying their clothes are the parents of the kids? How many kids can afford clothes without their parents help? You wonder how the CEO of a brand so big, have the galls to be so blunt and harsh. And when the “apology” came, were we ready to forgive?

Edward Burkhardt, the head of the train’s U.S.-based parent company blamed the engineer for failing to set the brakes properly before the unmanned Montreal, Maine & Atlantic Railway train hurtled down an 11-kilometre incline, derailed and ignited in the center of Lac-Megantic early Saturday.

Look at Montreal Maine and Atlantic Railway. The CEO was the founder and CEO of Wisconsin Central – a company where sixteen tankers jumped the tracks and exploded into flames evacuating the town of Weyauwega, Wisconsin, in 1996. This is a top down issue. Harry Truman famously said “The Buck Stops Here” but many CEOs of today consider themselves immune from any scrutiny and criticism as if they were an elevated caste.

Stop blaming the consumer and be accountable for your product. People have a choice to wear whatever size they feel comfortable in.

A brand is an embodiment of the people who run it and by extension the perception of a brand as being either bad or good is the reality of what the community at large thinks of it.

Think Blink Advice: Apologize because you are truly sorry about it. Don’t make it into a marketing glib. People are smart. Genuine regret gains genuine brand fondness. 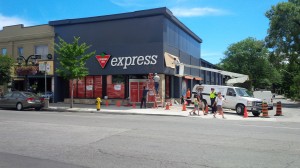 Retailers need to start thinking out of the box and thinking about how they can serve their customers better. That’s just what Canadian Tire is doing with the opening of their new Express store today, right at the corner of Gough Avenue, in the heart of Toronto’s Pape and Danforth neighbourhood. With a mere 6,100 sq. ft. location (a far cry from some of its suburban locations that average close to 35,000 sq. ft.) Canadian Tire is continuing to expand its reach by not only thinking small, but smart.

So what’s the idea behind the retailer’s marketing strategy? Well, the retailer may have just tapped into something big, which really comes down to the heart of how Torontonians feel about their neighbourhoods. Remember the outcry from residents in Kensington Market when they heard that Walmart wanted to open up a store in their neighbourhood? Like a lioness protecting her cubs, Torontonians have a fierce loyalty towards the local businesses that make their neighbourhood thrive echoing in practice what Jane Jacobs believed: that “the point of cities is multiplicity of choice”. And when we think of Canadian Tire, we identify with it, quintessentially Canadian—a trusted and recognizable brand.

If you frequent downtown Toronto often, no doubt you will have realized that the future is within the city’s inner core. You can barely face any direction without a gigantic crane creating a huge eyesore. Condo construction is at an all time high and the need for urban stores that can be a one-stop-shop for busy downtown consumers will surely be in high demand. This is consistent with Jeff Rubin’s argument that “we must re-engineer our lives to adapt to the contours of a much smaller world”. The smaller scale (but well-stocked) Home Sense stores located on Spadina Avenue and Yonge Street are booming and symbolic of this trend. Canadian Tire’s marketing strategy to sell you everything, is definitely paying off: in the Canadian Tire Express store, they have just tweaked that strategy and become more focused.

The Pape and Danforth location is unique in that it’s a melding point of communities – from Riverdale, to Greenwood Coxwell and Danforth Village. Plus for urbanites who don’t own a car, the subway line is located so conveniently: a brilliant choice in real estate whereby the key of “location, location, location” is paid lip service to but overlooked in terms of execution.

Torontonians are also undergoing a big dig of sorts in the update to the city’s transportation infrastructure. With all the construction going on at Lakeshore, Leslieville and the Beaches, this store will no doubt also be a go to hub in the interim. In the 1980s, the company’s memorable tagline was “there is a lot more to Canadian Tire than tires” however keep mind that if you do need tires or your car needs a check-up you will have to head over to the mothership location at Leslie and Lakeshore.

How does a company that’s primarily known for selling you everything, going to switch gears and think small?

1. It plans to stock most categories that the chain is known for, but fewer items.

2. If you need anything that’s not available you can order it to be delivered to the store or to your home (for a very reasonable delivery fee).

3. Inside, the design resembles a neighbourhood hardware store (except perhaps for the four giant TV panels). Outside, it looks upscale and blends into surroundings.

4. An ingenious idea to maximize space has been deployed using smart hidden panels in the hardware area, which pack in an extensive range of nuts, bolts, fasteners, etc.

5. The company has tapped into a lifestyle. Residents can easily grab a cooler and blanket from Canadian Tire, pick up some ready to go food from the nearby shops, and head over to Withrow Park for an impromptu picnic.

Kudos to a store that’s thinking out of the box and making a blink in an urban neighbourhood. We give it a #ThinkBlink star.