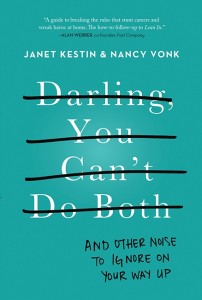 When I first heard that Janet Kestin and Nancy Vonk were writing a book, enthusiasm quelled in me. Finally, a book that not only appealed to the creative advertiser in me, but the fact that it was written by two highly respected women, was the cherry on top.

While I worked at Ogilvy, stories were always surfacing via the grapevines of the illustrious duo who had built a career around a world that was primarily dubbed as a man’s world.

Here are a few things for long-term success:

This was the duo who hatched the famous Dove’s Campaign For Real Beauty. Using their smart emotional prowess, they tapped into the mind of the consumer. And, for that they had gained a lot of respect in the industry and perhaps may have earned the reputation as one of the pioneers responsible for opening the advertising world to other creatives; myself included. For that I cannot thank them enough, for it is a career that has been rewarding.

Advertising is still primarily a sexist industry. During my career I found very few women who worked on beer accounts, simply because they weren’t given the chance. Some of that stigma is definitely dissipating. I personally have had the chance to work on Guinness and Smirnoff, in addition to tech clients Cisco and IBM. The industry is shedding its stereotypes and in some ways these women helped open that door to acceptance.

But, I did find that a lot more time in the book was devoted to the experience of a women in a man’s world. While I enjoy hearing about women’s success, I easily tune off when it all starts sounding the same. Recently there has been an insurgent of books out there that tackle the issue of women in a man’s world. I’m not disputing the relevance of these books, especially for women eagerly seeking guidance and advice; but for me it feels redundant (perhaps because I’ve already read my share of them). Now, I’d rather get down to the crux of the creative problem solving process, and be inspired by new inventive ways of tackling problems. It’s no wonder I’m inspired by new paradigms in business creativity with books like Thinking in New Boxes by Luc De Brabandere and Alan Iny, as well as one of my faves The Back Of a Napkin by Dan Roam.

But you should judge for yourself. After all, what works for one person doesn’t necessarily work for another. And, being open to ideas is the first step in making progress. The book is published by Harper Collins Canada and available in bookstores and online.

Do let us know your thoughts when you do pick it up.

One of my favourite exerts from the book Kolia by Perrine Leblanc winner of the Governor General Award :

“Kolia regularly repeated what Iosif had told him to buoy up his spirits in the camp. Appear to be weaker than your aggressor. Breathe slower than your enemy. Eat only two meals a day to train your body to withstand hunger. Sleep less. Think more. Read everything you can and anything you want to. But above all, constantly question what others tell you, even books, even Victor Hugo. Even me.”